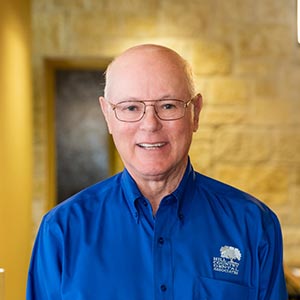 Dr. Jay Burditt grew up in Leakey, Texas. He attended Southwest Texas Junior College and Trinity University prior to receiving his DDS degree from The University of Texas Dental Branch, Houston, in 1967. He served 3 years in the US Air Force, including a hospital internship at the US Air Force Hospital at Chanute Air Force Base near Rantoul, Illinois. Following his military service, he, his wife Starla, and their first child settled in Kerrville, where he opened his dental office in 1970. In 2005, he merged his practice with Hill Country Dental Associates and has been a fixture in our group practice ever since.

Like the other doctors in our group, Dr. Burditt holds membership in the American Dental Association, the Texas Dental Society, and a local chapter of the Texas Dental Association (he and Dr. Jamie Bone are members of the San Antonio District Dental Society). Additionally, Dr. Burditt is a Fellow in the American College Dentists. His primary dental interests include fixed and removable prosthodontics and oral surgery.

Dr. Burditt and Starla have 2 daughters and 5 grandchildren. He is member of First United Methodist Church, and he is a past President of the Kerrville Host Lions Club. His hobbies include farming, ranching, fishing, and travel.