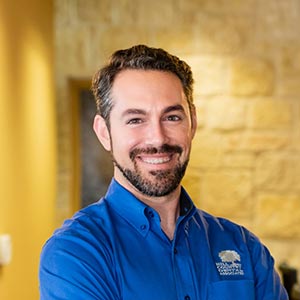 Dr. Casey Cazes was born in Louisiana but spent much of his life growing up in Friendswood, Texas. As a young man, his love for the outdoors grew through active participation in the Boy Scouts, ultimately earning the rank of Eagle Scout. He earned a Bachelor’s Degree of Science with a concentration in Cell and Molecular Biology from Tulane University in New Orleans, Louisiana. Upon completion of his college education, Dr. Cazes served as a Surface Warfare Officer in the U.S. Navy. After fulfilling his commitment to the U.S. Navy, his interest in dentistry led him back to San Antonio, Texas where he went on to work as a dental assistant at the University of Texas Health Science Center at San Antonio (UTHSCSA). Working side-by-side with multiple dentists and witnessing the positive changes being made in patients’ lives affirmed that he made the right choice to pursue his interest in dentistry. It was this interest that would send him to the School of Dentistry at the University of Texas Health Science Center at San Antonio (UTHSCSA), where he completed his Doctor of Dental Surgery degree. Dr. Cazes then returned to school full-time to complete an Advanced Education in General Dentistry (AEGD) residency program at UTHSCSA, where he gained significant additional experience, including dental implant placement, wisdom teeth removal, and root canal procedures.

Dr. Cazes enjoys giving back to the community and has provided community services through the following initiatives:

His professional affiliations include:

In his spare time, Dr. Cazes enjoys spending time with his family, fly-fishing, fly-tying, cooking, camping, cycling, photography, kayaking, and woodworking. He also enjoys spending quality time with the love of his life, a 16-foot hand-made cedar strip canoe. (Yes, he built it himself!)